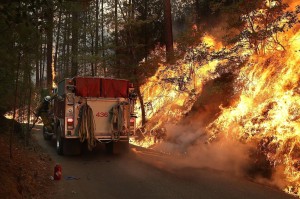 facilities in wilderness areas is real. Dry conditions at various times of the year and in various parts of the United States greatly increase the potential for wildland fires. Advance planning and knowing how to protect buildings in these areas can lessen the devastation of a wildland fire. There are several safety precautions that you can take to reduce the risk of fire losses. Protecting your home from wildfire is your responsibility. To reduce the risk, you’ll need to consider the fire resistance of your home, the topography of your property and the nature of the vegetation close by.

The City of Florence is highly susceptible to wildfires during periods of drought. The problem is exacerbated by the presence of dense stands of “Shore Pines” throughout the city and surrounding area. The “Shore Pine Forest” proliferates from the Siuslaw River north to the Yaquina River. Shore Pine domination in the Florence Area is directly related to early wildfires; Yaquina (1), Aug/Sep 1849, Yaquina (2), Aug/Sep 1868, and possibly the Coos Bay Burn, 1868.

Pinus contorta is a fire dependent species, requiring wildfires to maintain healthy populations of diverse ages. The bark of the lodgepole pine is fairly thin, minimizing the defense the tree has to fire. The heat of these closed-cone pine forest rejuvenating fires open the cones to releasing the seeds. This allows the species to regenerate and maintain its place in the forest habitat.

Excessive wildfire prevention disrupts the fire ecology. The stands are usually so densely populated that the trees self thin, or out-compete each other, leaving dead trees standing. These become a dry ladder fuel that can accelerate the fire to the crown of living trees. When the fire reaches the crowns of the trees, it can jump from tree to tree and becomes relatively unstoppable.

The natural fire regime for this species is primarily driven by climate. The fires occur most often after years of drought. Lodgepole pine occurs from the upper montane to the subalpine region. These types of forests experience a lot of moisture in the form of snow in the winter due to their altitude. The density of the tree stand also prohibits the establishment of an understory. With all of that being said, the likelihood of a surface fire occurring are rare. Thus, infrequent, high severity fires dominate this species.

An example of the climate that plays a huge role in the fire regime of the lodgepole pine is quite complex. There are three different oscillations that play a major role in droughts. These are the Pacific Decadal Oscillation (PDO), Atlantic Multi-decadal Oscillation (AMO) and El Nino (ENSO). A combination of these oscillations being in effect (+) or not in effect (-) have a global effect on the water available to these forests. So when the AMO +, ENSO – and PDO -, there is going to be a drought and likely a severe subalpine fire.

“The southernmost extent of the fire was likely near the mouth of the Siuslaw River. This location was described by Smith, whose father and uncle traveled south from Heceta Head during the aftermath of the fire, and described their journey to him and other family members on their return:

Then they [Smith’s father and uncle] started. Where there was a mountain [possibly Cape Mountain], that place there did not burn. So they two kept on going on that trail, and they arrived at where there was a place (covered) with grass. And only there did the fire reach. Then they two ascended. Now it was gradually getting light all over [the smoke was beginning to clear, after darkening the skies for about 10 days]; just a little (light) showed far away. At last they came below, whereupon they two started to walk on that beach. Then they two kept on going along the beach. Everywhere even the blossoms of the highest trees had burned down, (as could be seen) after the water came with them to the beach. Now not long (afterward) they two saw a bear walking along the edge of the water, just partially burned. At last they two arrived at the mouth of the Siuslaw River. All the pine trees (there) were partially burned. Only ashes (could be seen) all over, because all the pine trees had caught fire.

Smith’s description conforms very well with subsequent maps of the area, which show the fire burning all the way to the coastline–right to the strip of shorepine noted by Smith that borders the beach–at the mouth of the Siuslaw River. Whether the fire continued southward to the Umpqua River, or whether the burned land between the Umpqua and Siuslaw dates to the 1868 Yaquina reburn or to the Coos Fire of the same year, is unknown.”

A prolonged drought in forests promotes an increase of insect pests, which in turn damage trees already weakened by a lack of water. A moisture-deficient forest constitutes a significant fire hazard.